Here's a pro tip 🔥 for all you Laravel developers: You can customize the default order of data retrieved from relationships! #Laravel #PHP #PHPRC 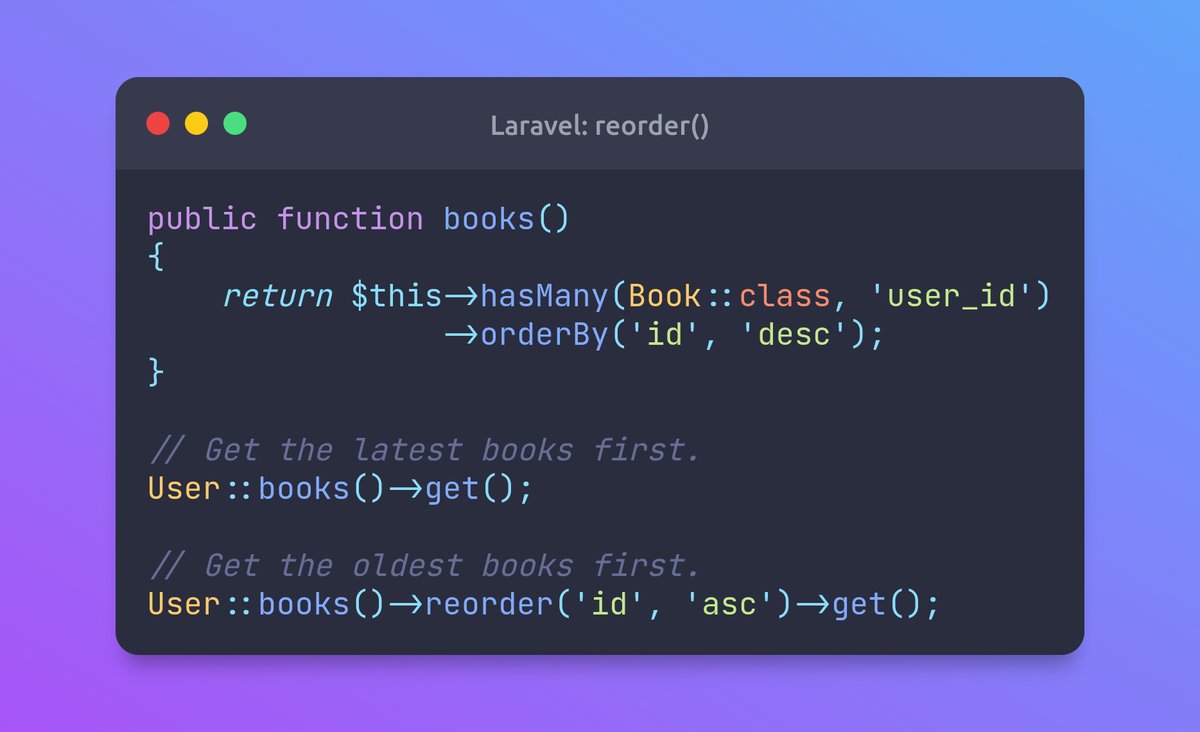 #Laravel Tip: Queries that need to examine string columns will always be slower than integer columns (even when indexed). Therefore, when storing data, consider whether you need to keep the string representation... 👇 example in link below 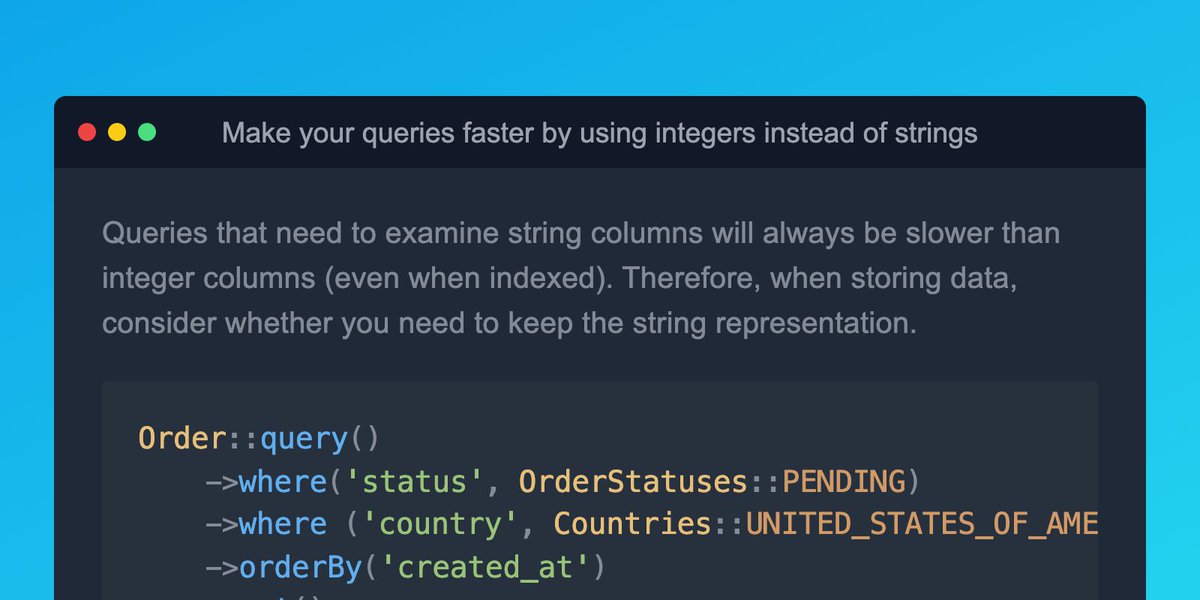 🔥 #Laravel Tip: Eager-loading your data is a very important, but don’t forget to add constraints to your eager loading queries so that they don’t pull in lots of data that you don’t need. 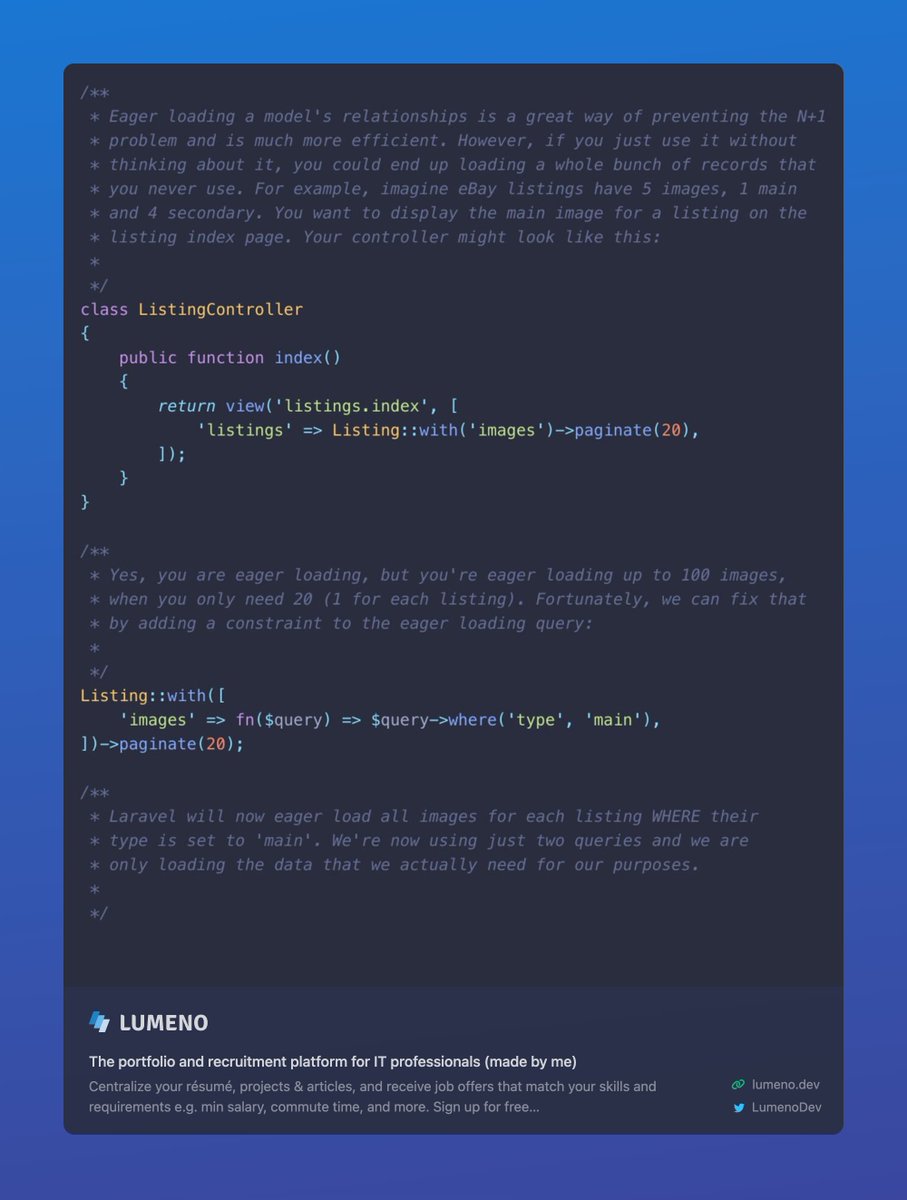 🔥 #Laravel Tip: Knowing the difference between calling ‘fresh’ or ‘refresh’ on a model is quite important. If you’re new to the framework, then here’s a simple explanation on how they differ. 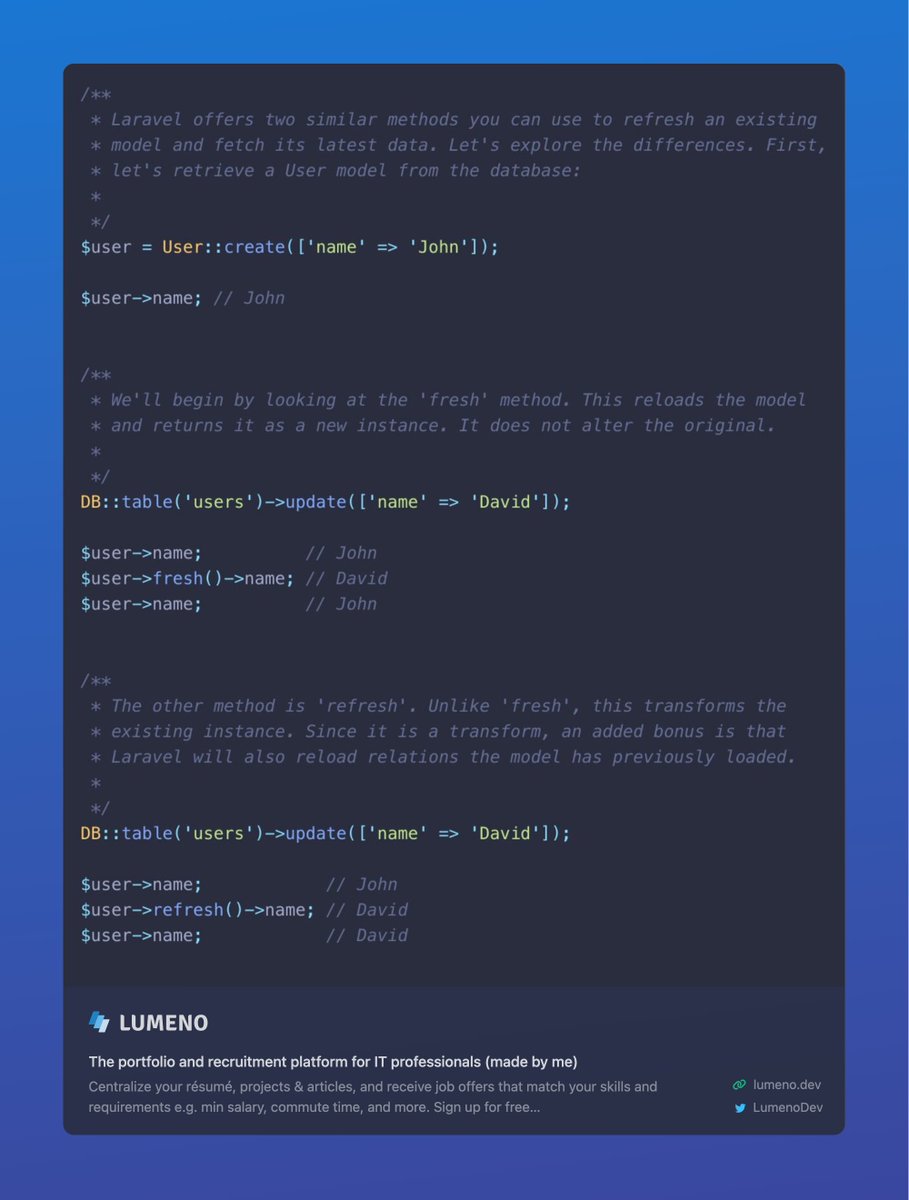 🔥 #Laravel Tip: Eloquent's 'whereExists' method is useful, but it relies on sub queries. A more efficient way to run the same query is an advanced inner join. 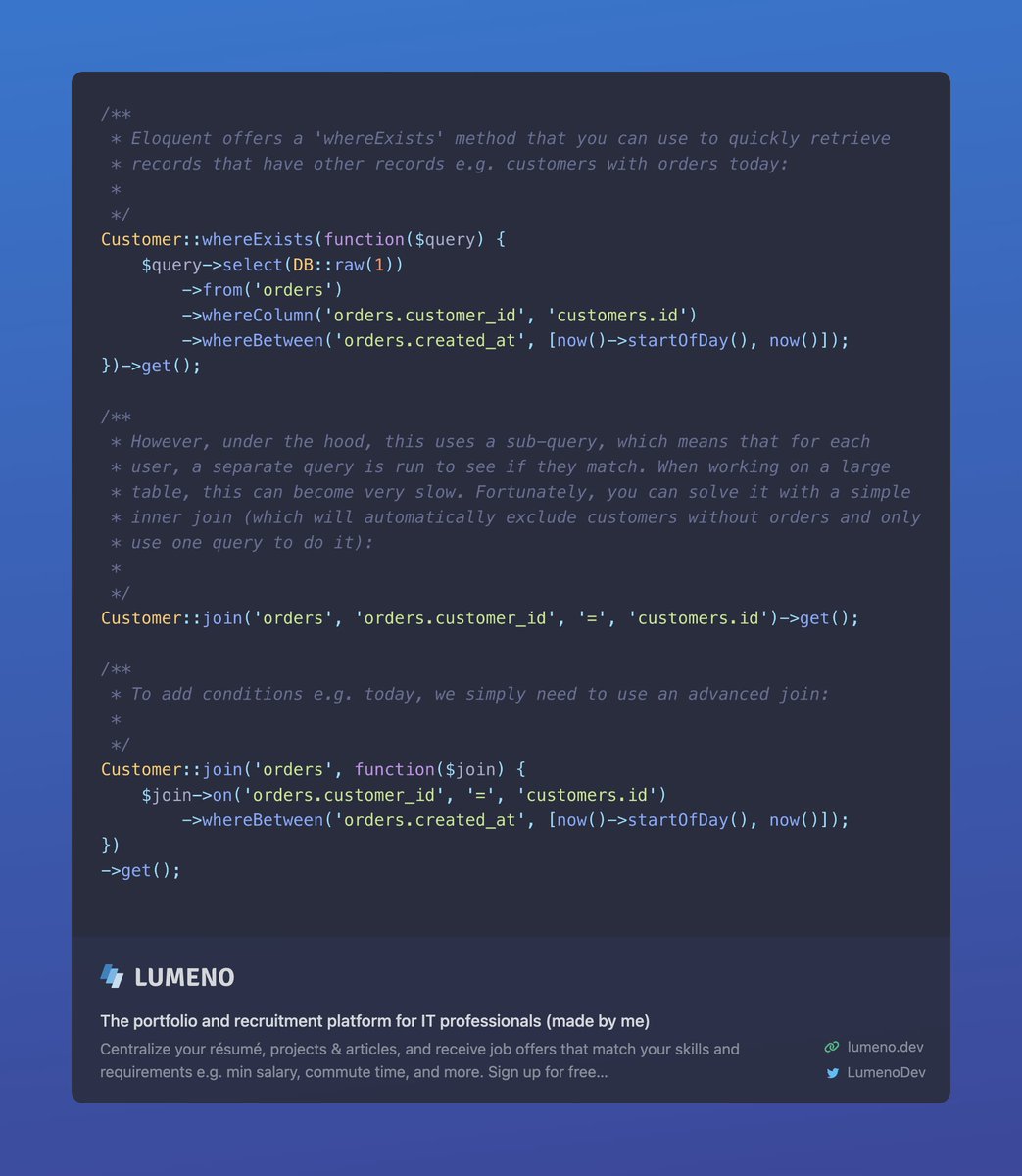 🔥 #Laravel Tip: Eloquent’s ‘whereDate’ function is useful, but it prevents the database from using an index, which can effect performance on large tables. Fortunately, it is easy to replace it with ‘whereBetween’: 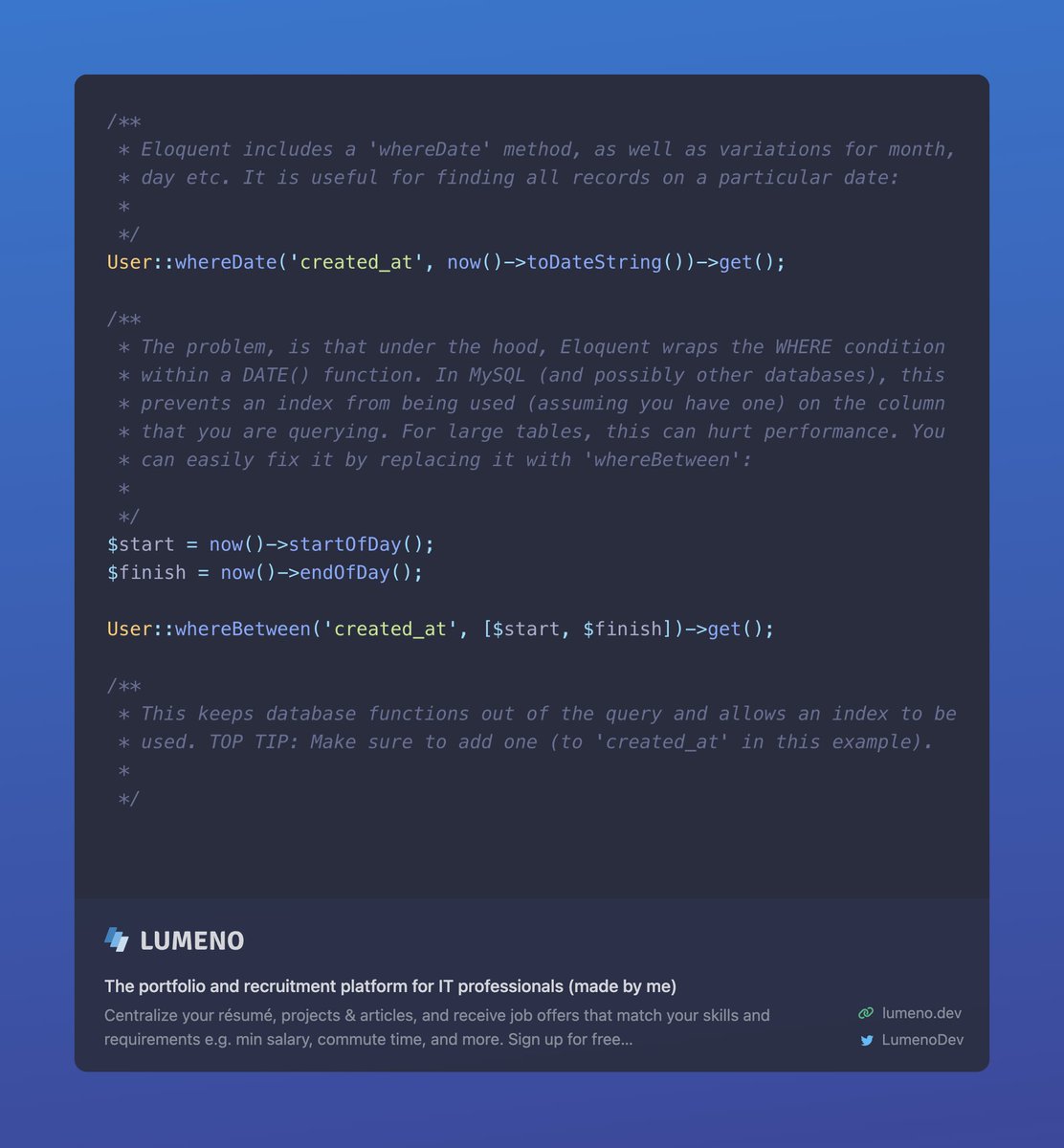 🔥 #Laravel Tip: Eloquent provides a ‘withCount’ method, but it uses a sub-query, which can be up to 8 times slower (or more in some cases) than using a leftJoin & groupBy. Refactoring only requires a few changes and can make a big difference… 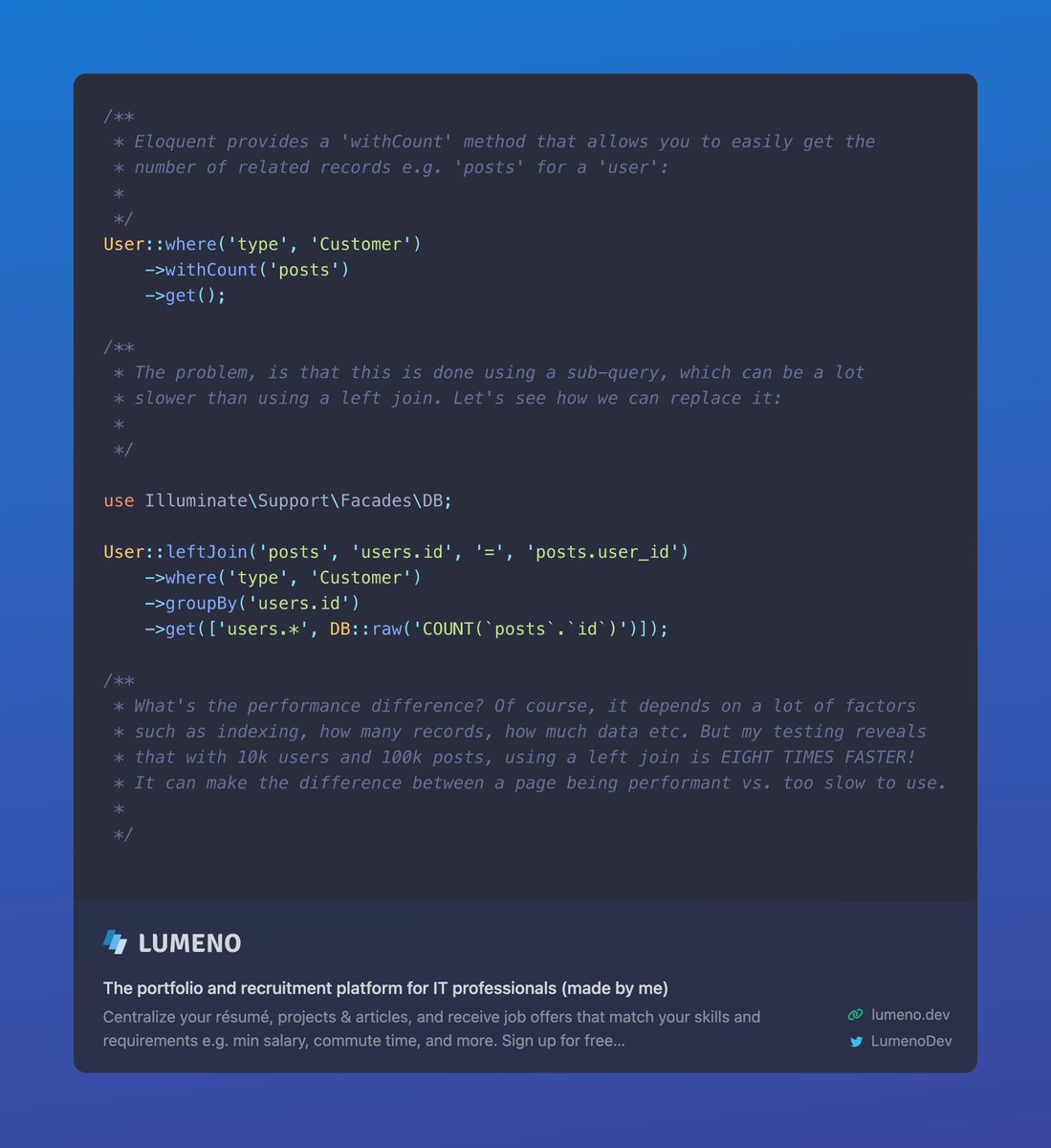 🔥 #Laravel Tip: Eloquent offers many undocumented methods that can help to make your code easier to read. For example, the whereBelongsTo method simplifies finding resources that belong to a model instance. 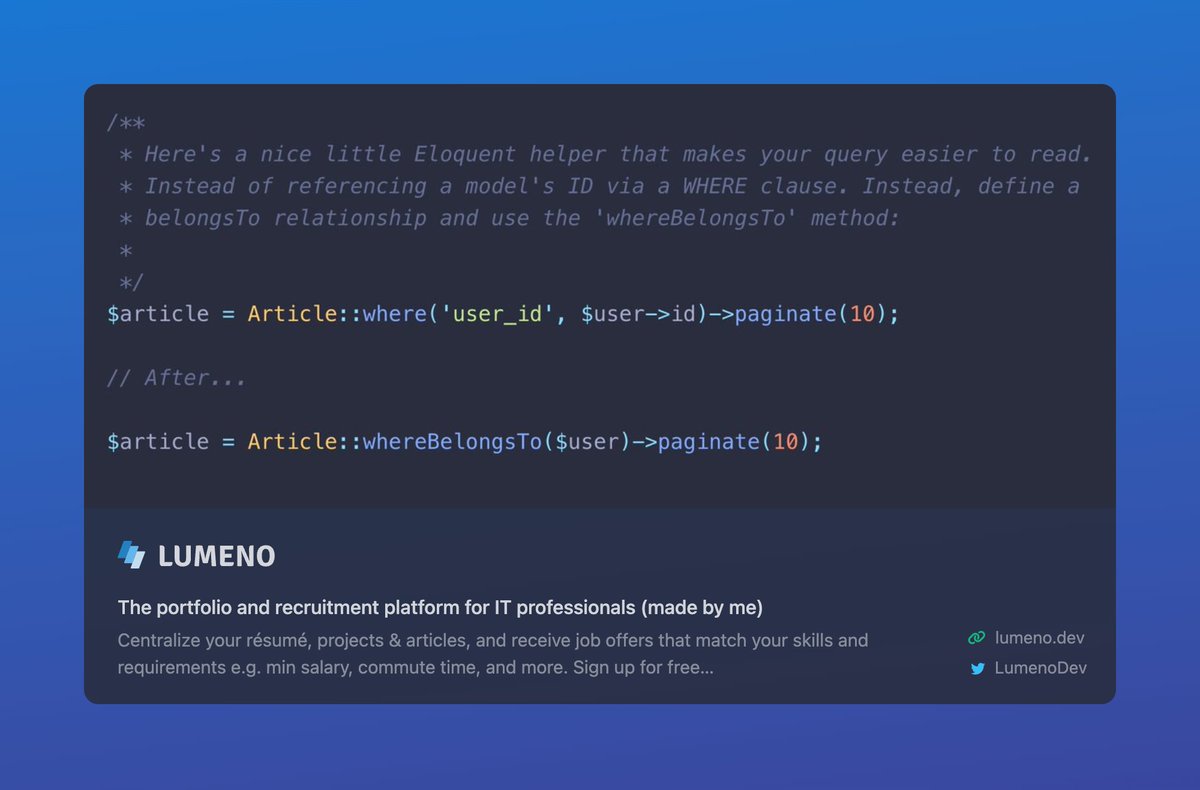 While working on the upcoming Oh Dear redesign, I noticed that list that displays all sites of a team was very slow. To display that list, a lot of queries were used. With a couple of minor adjustments, I could reduce the number of queries...

If you have some experience using databases, it is very likely you have used joins at least once in your career. Joins can be used for a bunch of different reasons, from selecting data from other tables to limiting the matches of your query.

A minor release for Laravel 9.x dropped a few days ago and among lots of new features and improvements, this release has introduced a new method called findOr in the Eloquent Builder and Relations.

If you've tried to use orderBy on a previously ordered query in Laravel, you'll probably find it doesn't work. There's a great reason for that, which we'll explain at the end of the post.